My coworker surprised me at work today by giving me a Hello Kitty Squishmallow! I love it! It is so cute! Happy Hello Kitty Reading: ) 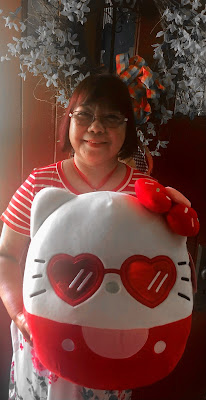 Popular posts from this blog

June 08, 2022
There will be a new tv series called Hello Kitty: Super Style ! Instead of the show being a 2-D television series, it is going to be animated in 3-D! It is in production and will launch on Amazon Kids Plus later this year! The story will be how she helps her friends in need. Hello Kitty's bow will have magical powers! I am so excited for this tv series! What do you think? Are you excited as much as I am? Let me know in the comments below! Happy Hello Kitty Reading! :)
Post a Comment
Read more

February 21, 2014
I got a hello kitty doll from a library patron.
3 comments
Read more

Hello Kitty is No Longer Sanrio's Most Popular Character!

Sherie Jacks
Hello, my name is Sherie. I work at the Fayetteville-Lincoln County Library for over eight years. I love everything Hello Kitty, which is why I created this blog.